Top 10 things to do in Utah

The information below is required for social login

A land where mountains and lakes meet the desert, Utah is set in the heart of the western United States. A landlocked region, the state is bordered by Idaho to the north, Wyoming to the northeast, Colorado to the east, Nevada to the west, and Arizona to the south.

This diverse state offers a blend of vibrant city life, simple countryside living, and raw natural settings that are made for adventure. Utah’s southern landscape is rugged and red, while its northern reaches are white accented with shades of green. A vast stretch of desert and rocky cliffs covers the southern area, while the northern region is adorned with snowy mountains and pine forests.

Thanks to its mountainous terrain, Utah has an arid climate. Summers are filled with long days that are hot and dry. Winters, on the other hand, have shorter, cold days.

Present-day Utah is inhabited by people from around the world and has a rich history. The record of human life in Utah spans thousands of years.

Long before the arrival of European explorers, the land was occupied by native people. The earliest settlers, Puebloans, built homes in Utah. The Navajo and Ute tribes came to the region much later. Utah gets its name from the Utes, whose name means “people of the mountains” or the “one that is higher up.”

The Arrival of the Spanish

It wasn’t until Juan Antonio de Rivera, a Spanish explorer, arrived in the region in 1765 that Europeans entered Utah. His party was the first group of Europeans to see the Colorado River. In 1776, another expedition led by priests entered Utah. In the late 1700s and early 1800s, Utah saw an influx of pioneers. They included Jim Bridger and Jedediah Smith, who discovered the Great Salt Lake and passed through the Rocky Mountains, respectively.

Utah As a State

When the United States took over Mexico and gained control over Utah, The Church of Jesus Christ of Latter-day Saints wanted to join the nation as the state of Deseret. However, the land was declared to belong to the territory of Utah. On January 4, 1896, Utah achieved statehood.

The 20th century saw Utah progress. Famous parks, skiing areas, and resorts were established. When it’s covered in a blanket of dry, powdery snow, the Wasatch Range is one of the best ski areas in the world. The scenic beauty attracted tourists, but the state also became a famous filming spot, especially its rugged regions.

Today, Utah lifestyle is a mix of quietude and vibrancy. While certain areas are quiet and conservative, places like Salt Lake City and Park City pulse with scenes of vibrant nightlife.

Today, you can get a glimpse into life in Utah with magazines in Utah like Utah Life Magazine.

Things to Do in Utah

Are you a golf enthusiast or do you love to ski? Is hiking your passion or do you prefer the fun of city life? Utah has all this and more to offer. The state has something for everyone.

We’ve narrowed the list down to the ten best places to visit in Utah so that you can make the most of your life in Utah.

Zion National Park is one of the best places to visit in Utah for all the right reasons. Visitors get to enjoy outstanding scenic views. With its towering rose-colored cliffs, waterfalls, canyons, native plants, and wildlife, the park can easily be counted as the most incredible national park in America. 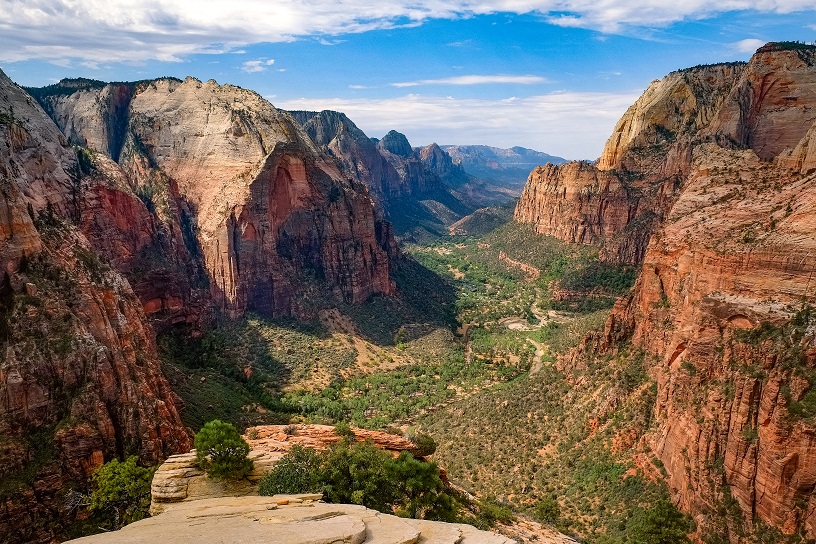 A hiker’s paradise, it features miles and miles of backpacking and hiking trails. The Narrows, Observation Point, and Canyon Overlook Trail are just a few of the trails that you can enjoy. Don’t forget to check out the famous Angels Landing, which is not for the fainthearted.

Bryce Canyon National Park is just one of the cool places to visit in Utah! Utah Life Magazine readers speak about its unique, otherworldly beauty. What makes it so distinctive, you ask? 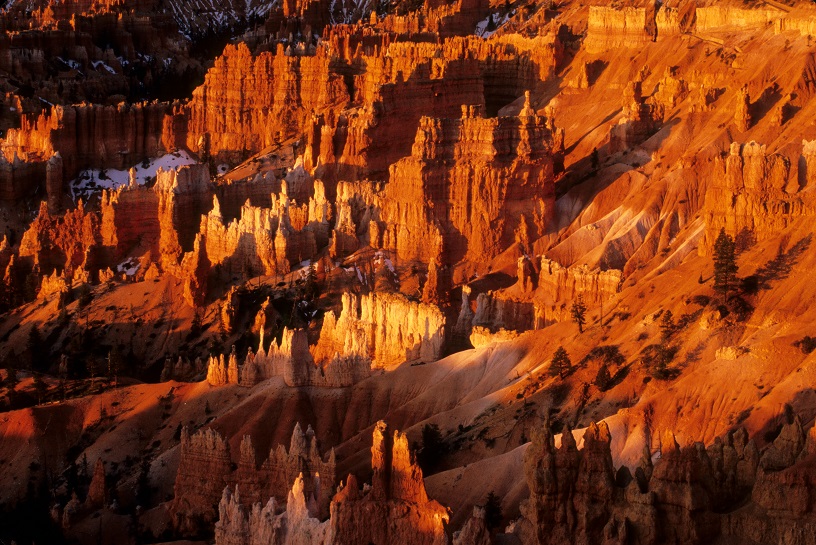 The orange-red hoodoos - vertical stone pillars in hues of red, orange, pink, and cream - and amphitheaters create a magical setting that distinguishes this park from the many others in the state. You can enjoy the breathtaking beauty of this place by hiking or horseback riding.

Life in Utah is not all sand and stone. There’s water, too! Yes, if you love the beach or are in the mood for water activities, Lake Powell is the place to go. The 2,000 miles of shoreline under the sunny sky make it the perfect setting for enjoying some paddling, kayaking, or swimming. 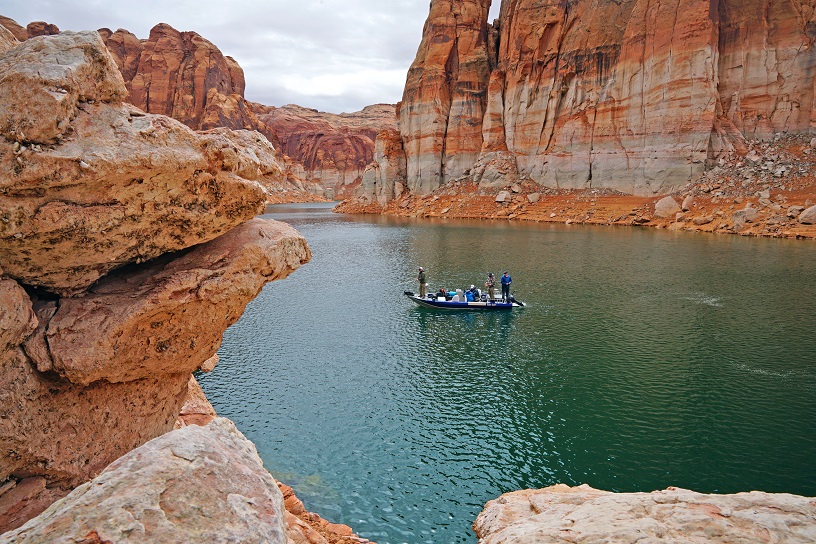 Members of The Church of Jesus Christ of Latter-day Saints make up a major portion of Utah’s population. You can find vestiges of the faith in the Utah lifestyle. If you’re a visitor, getting a glimpse into this major part of Utah’s history is a must! 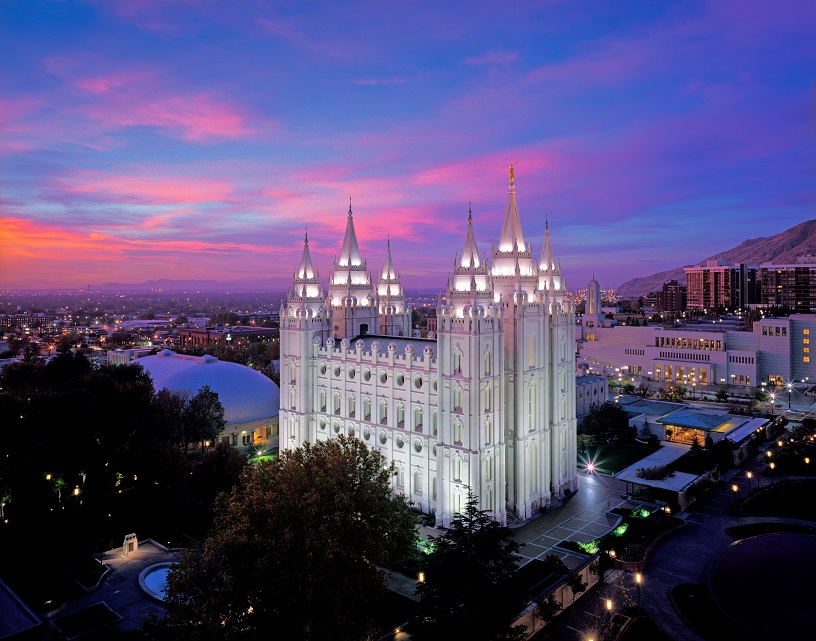 Temple Square in Utah’s capital, Salt Lake City, houses the Salt Lake Temple. Constructed in the late 19th century, it is not only one of the largest LDS church temples but is among the Utah famous landmarks.

You can’t get closer to Mars on Earth than in Arches National Park. One of the cool places to visit in Utah, the park is home to spellbinding natural rock formations. It houses 2,000-plus documented natural sandstone arches. With jaw-dropping stone arches rising into the blue sky and backed by the snow-capped La Sal Mountains, the park is one of Utah’s greatest scenic delights. 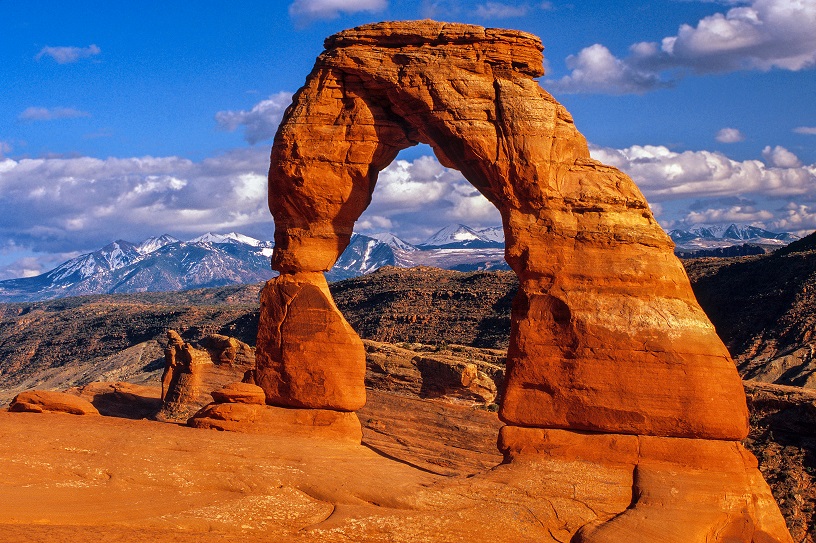 Devil’s Garden, Fiery Furnace, Double Arch, the Windows, Delicate Arch, Broken Arch and Sandstone Arch are some of the most popular arches in the region. If you’re an adventurous soul, you can hike or rock climb in the park. More relaxed souls can enjoy the scenic views from the comfort of their vehicle or from horseback.

Does the idea of living amid mountains covered in powdery white snow appeal to you? Then Park City has to top your list of places to visit in Utah! The site of the 2002 Winter Olympics, Park City offers snow sports enthusiasts numerous things to do. 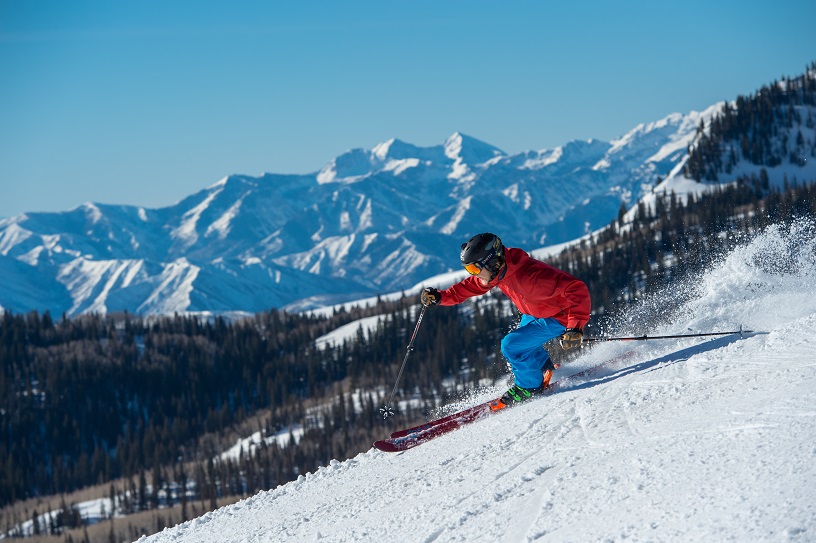 A 45-minute drive from Salt Lake City, Park City has some of the state’s best ski resorts. Whether you’re a beginner or a pro at skiing and other snow sports, Park City slopes can accommodate you. Ski or snowboard to your heart’s content, or just sit back and enjoy the breathtaking views.

Park City also hosts the Sundance Film Festival around the beginning of the year. If you’re planning a visit in the summer, you have the option of ziplining and white water rafting. Plus, you can always roam the streets of historic Park City and enjoy shopping and great food.

The southern region of the state provides a plethora of opportunities for hikers and bikers. But nothing can beat the city of Moab when it comes to an adrenaline rush! 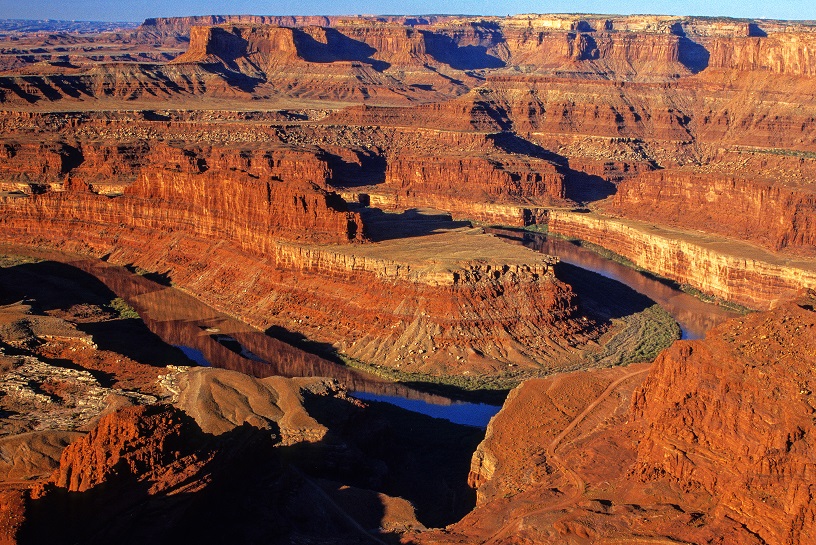 Located between Arches National Park and Canyonlands National Park, Moab offers a lot for visitors to do. You can hike, bike, enjoy off-road adventures, go white water rafting, skydive, or even enjoy a hot air balloon ride. Or you can go for the spellbinding views of red rock formations. Since summers are hot and there’s not much activity in winter, spring and fall are the best times to visit Moab.

Until now, you’ve only seen dinosaurs in the film “Jurassic Park.” But what if you could see real evidence of the existence of these extinct creatures? Dinosaur National Monument is home to a collection of more than 1,500 dinosaur fossils. Fascinate yourself with the physical remains of dinosaurs and other reptiles that died thousands of years ago in this place. Don’t forget your camera! 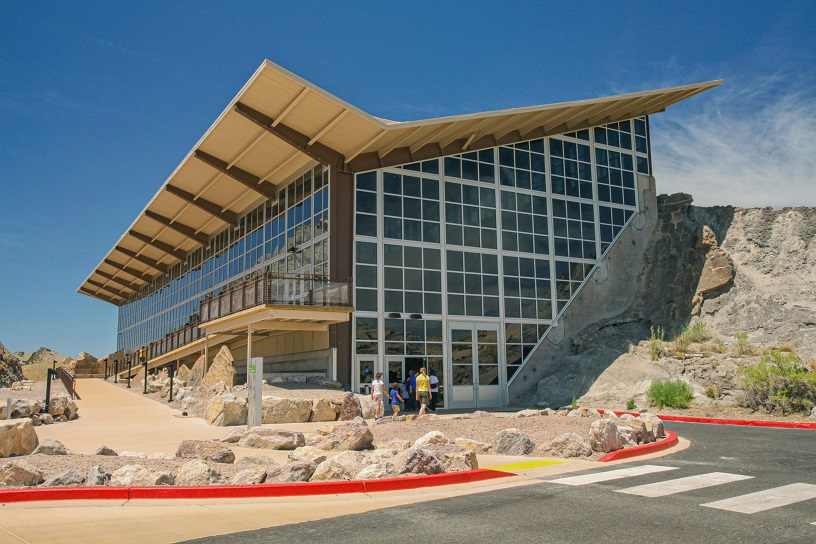 Whether you’re a resident, vacationer, or magazine in Utah, you cannot get tired of the stunning rocky cliffs and canyons carved by nature while you’re in this state. This popular national park is Utah’s version of the Grand Canyon, and is, fortunately, less crowded. 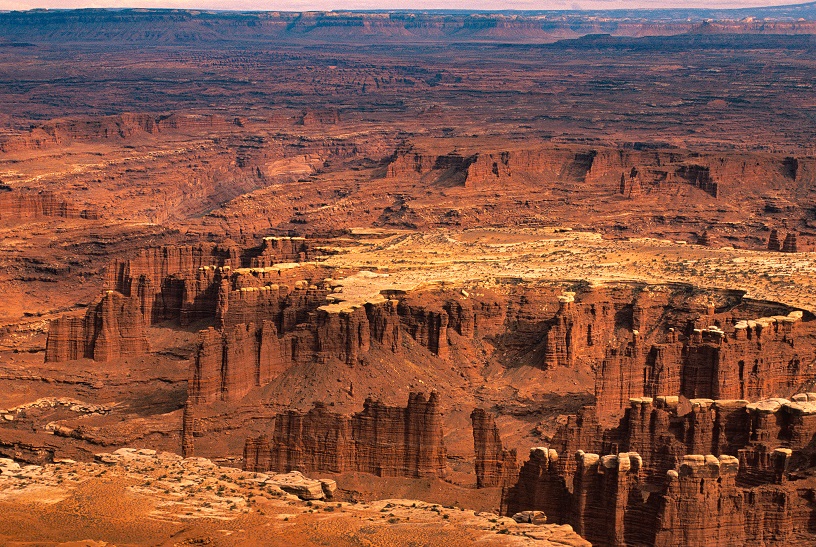 This huge area is divided into sections that offer distinct experiences. The one that attracts the most sightseers is Island in the Sky. Rising over 1,000 feet, Island in the Sky provides visitors with incredible views of the surrounding canyons and mountains. Mesa Arch is one of the most famous attractions in this area. The Needles and The Maze are two other regions that are filled with hiking trails, sandstone spires, and rock art.

One and a half hours’ drive west from Salt Lake City lies a vast stretch of flat, hard land. It’s called the Bonneville Salt Flats. 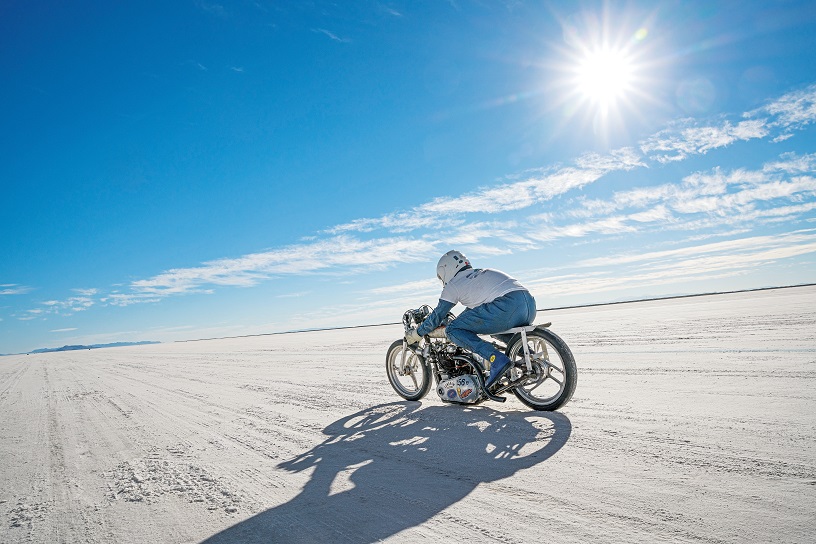 This salt flat is devoid of vegetation and stretches as far as the eye can see. It’s a scenic space that has little to no crowd most times of the year, so you can venture out into the land to experience solitude. In August and September, however, the place turns into a racecourse. Speed Week is held during the month of August, while the World of Speed is hosted here in September.

Utah is a paradise for individual adventure seekers and families alike. There’s a list of places to visit in Utah that includes several national parks and ski resorts. They make perfect settings for a family vacation.

Utah offers a plethora of activities year-round. If you like moderate temperatures and crowds, however, April through May and September through October (i.e., spring and fall) are the best months to visit this state. Winters are cold and snowy, but they offer the opportunity to explore hot springs and ski on stunning slopes. To learn more about what you can do in Utah, subscribe to Utah Life Magazine.

Utah sees a lot of solo travelers, mainly hikers, bikers, and skiers, throughout the year. Its national parks and ski resorts offer safe and pleasant environments for solo travelers.

There’s not one but several best places to visit in Utah. From hiking around rocky canyons to skiing in Park City to enjoying nightlife and good food, there are plenty of things to do in Utah. Get Utah Life Magazine to learn more!

Most destinations in the southern region, which include the famous Zion, Bryce Canyon, and Arches national parks, might require a trek. If you’re not much into strenuous hikes, however, you can find many other suitable options.